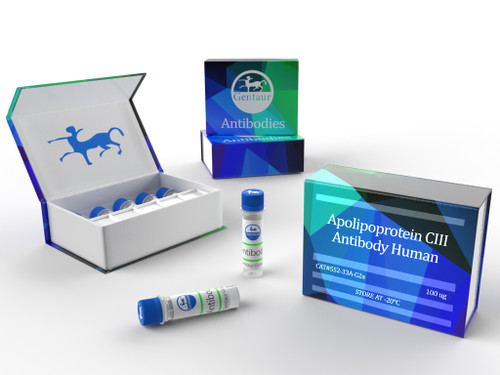 While functionally the same as a polyclonal antibody - recognizing multiple epitope sites on the target and producing higher detection sensitivity for low abundance targets - a recombinant rabbit polyclonal antibody has a known mixture of light and heavy chains. The exact population can be produced in every lot, circumventing the biological variability typically associated with polyclonal antibody production.

Apolipoprotein C-III, also known as apo-CIII, is a protein that in humans is encoded by the APOC3 gene. Apo-CIII is a component of very low density lipoprotein (VLDL). APOC3 inhibits lipoprotein lipase and hepatic lipase; it is thought to delay catabolism of triglyceride-rich particles.

The APOA1, APOC3 and APOA4 genes are closely linked in both rat and human genomes. The A-I and A-IV genes are transcribed from the same strand, while the A-1 and C-III genes are convergently transcribed. An increase in apoC-III levels induces the development of hypertriglyceridemia.